I stumbled across this really interesting article today. I’ve read similar things before, but the way this one was written was both relevant and obvious. Whether your child is doing fine in school or perhaps struggling with ADHD/LD or other learning inhibitors (that we can help with at The Paulk Clinic) this article is something to keep in mind!

Diclaimer: This was not written by myself, nor am I claiming it was.This was taken directly from toyourhealth.com, October 2012, Volume 6, Issue 10, written by: Editorial Staff.

With elections right around the corner, education is front and center as one of the perennial issues on the minds of voters nationwide. After all, whether you’re a Republican, a Democrat or any other political affiliation, if you’re a parent, one thing is certain: You want your children to have the best education possible.

For some parents, the candidate who appears to offer the best opportunity for that to happen may be the one they vote for in a few short weeks.

Regardless of politics, research suggests there may be an easy way to improve education, at least in terms of improving children’s grades: exercise. For example, one study found that children who performed the best on various fitness tests also had the best scores on standardized tests; nearly 30 percent higher than kids in the least fit group. And yet another study revealed that students who performed 50 minutes of endurance exercise in between taking a standardized written test performed better on the test administered afterthe exercise session.

The test was designed to evaluate attention and concentration skills, suggesting that exercise may have sharpened the children’s focus, leading to the better score in the second (post-exercise) test compared to the first (pre-exercise). What’s more, one study suggests that the more hours a student spends studying, the more likely they are to participate in physical activity – dispelling the notion that busy kids “don’t have time” to exercise.

So vote for your favorite candidates this fall, but whomever you choose, remember that you have the power to effect important positive changes in your life, and the lives of your children,  every day. Why not start by ensuring that everyone participates in at least 30 minutes of exerciseon a daily basis? If you’re not sure where to start, ask your doctor of chiropractic to outline an exercise program for you. 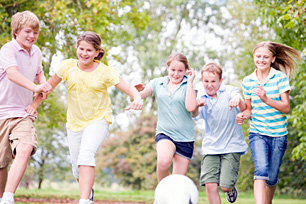